We woke up in Berlin, Germany, had a small breakfast and went down to the light rail station in Treptow. It was a wonderful day, the sun was shining — like the last two month — and it was hot, maybe 30°C in the shade. About 30 minutes later, we arrived at Berlin central station, slightly boiled, the train had no air conditioning. At least they opened the windows to create some airflow when the train was moving.

At central station, we climbed into an IC train to Hanover the capital of Lower-Saxony — with working air conditioning. As prepared travelers, we had seat reservations for all four of us. At a table. Unfortunately, not at the same table. Thanks to creative layouting, none of these old cars have the same layout and it seems to be to much of a hassle to actually program all layouts in the reservation system. This might also be complicated when they have to switch cars for maintenance. Still we had a wonderful ride and could switch trains in Hanover at the same platform. No luggage carrying exercise.

For the last leg, we used a local train (RE) from Hanover to Bremerhaven main station. These bright Lower-Saxons had WIFI in a local train. Very nice. However, they did not have electrical sockets, but my old school netbook can last for hours. They don’t these things anymore.

In Bremerhaven, we resided in the Nordseehotel. Nice place, slightly unfinished processes, but friendly staff, and — which is very important this summer — air conditioning.

After check-in, we had dinner at the Seute Deern, a sailing ship located at the Schifffartsmuseum, just a few meters away from our hotel. Also a nice place, nothing special about the food, but it was delicious and has a lovely atmosphere with friendly waiters.

Now well stuffed, we went for a walk and explored the area around the museum along the old and new harbor in Bremerhaven. My last visit to Bremerhaven was 22 years ago. The area north of the Schifffahrtmuseum was an old industrial wasteland with unused warehouses and sheds, reflecting the general theme of despair in Bremerhaven, which was an still is greatly supported by the most ugly Columbus Center.

Towers of the Columbus Center

Today the area has greatly improved. A new shopping mall and restaurant complex is sitting right beside the Schifffahrtsmuseum, together with a Dubai-style hotel and a science adventure park Klimahaus. Behind this complex, at the New Harbor, sheds and warehouses have been replaced by lofts, seaside apartments and the famous Auswandererhaus. Bremerhaven also rerouted bus routes making the pedestrian zone in the city center a real pedestrian zone. All in all the place improved greatly. 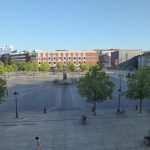 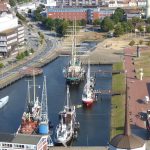 After our excursion, we went to bed ready to further investigate Bremerhaven the next day.