After our arrival in Lisbon our hosts picked us up. At their place, we unpacked and went to a tennis club for a morning coffee. Birgit tried to understand the word for coffee with milk, finally she asked and so the Portuguese said the word repeatedly, while we were trying to master it. So for beginners it is meje (de) leite, which means with half milk.  A complete order would have been meje leite por favor. Furthermore, we learned to say acconta por farvor to get the bill. However, we were not allowed to pay anything.

From a German perspective we were treated like first class premium guests. Way more than you normally would expect. And so at first we insisted in returning the favor. However, that seamed to be very un-Portuguese, as it was explained to us that we are the guests and that they would treat any guest of their daughter like that.

In Germany, such parents would have given us a key their home and access to the fridge. OR we would have stayed in a hotel. So all in all the hospitality was over the roof. 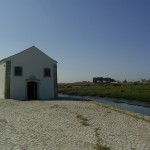 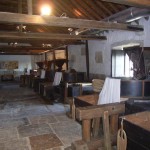 Inside the mill with the millstones 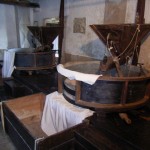 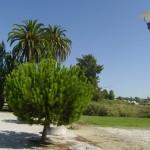 Portuguese round pine – at least that is how we classified it

After the coffee break we walked down to the tide mill of Lisbon. A tide mill is a very interesting thing (entrance is free) it was used to grind different kind grains and used tide to turn the stones. The whole procedure is as follows: When the tide rises, water floats into the bay and then trough a gate of the mill filling up the area behind the mill. The door of the gate is opened by the high tide pressure. At the tide maximum the door closes again automatically triggered by the water itself. Then the miller waits until low tide is reached? Now he opens small channels were the water flows through and turns a turbine. The turbine then turns the mill stone. The whole installation is from the 13th century. It is definitely a nice place to go in Lisbon (actually Almada on the south side of Tejo river). So all in all I was very fascinated by the installation.

We went back up hill and had lunch at a local restaurant just a few car minutes away. On the way there, Manuel explained to us that the city of Almada has its own nursery for plants which provides all the public flowers and trees. Furthermore, you can write to the major to get plants from there for special purposes.

At the restaurant, we were talking about cuisine and so it was decided that we had to experience as much as possible of the local cuisine. We had grilled sardines, calamari and a fish head from something else. And of course an espresso and pajamas, which is actually a combination of different deserts together on one plate. 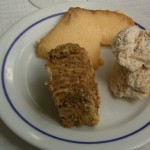 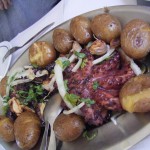 Calamaris with potatoes and garlic

Now it was time to explore Lisbon and walk off all the calories. Our hosts explained that we have to walk slowly, no Portuguese would run on a sunny  and hot day through the city.  Furthermore, walk in the shade. No Portuguese walks in the sun. Only tourists do that. Due to the extensive meal, the walking advice was easy to implement. And as a plain white person, which turns easily red like a lobster, the shade thing appeared very logical to me.

In Lisbon we went for some shopping. The marriage presents we brought from Paris and Kiel had to be packed and we had no wrapping paper or gift card with us. So we headed towards a paper shop. Manuel had described the way in great detail. 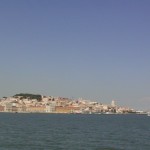 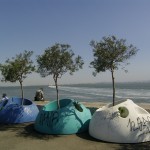 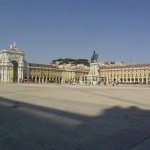 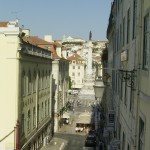 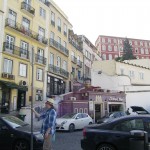 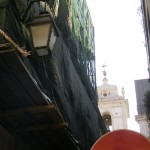 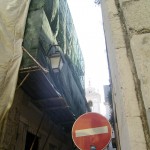 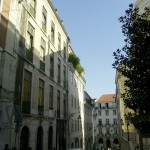 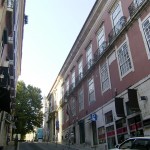 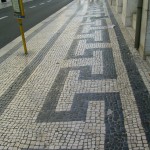 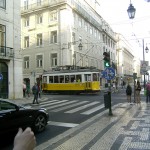 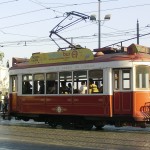 An orange Electrico tourists only 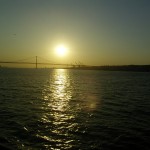 First we found the upper part of the shop where we got some wrapping paper and a pen. Then we strolled around staying in the shade, bought some water and chocolate in an organic shop and walked back.

On the way back we found the lower part of the shop. Actually, we found a shop from the same branch, so we went in and found all the missing pieces the first shop did not have. We even found better pencils. So we tried to exchange the previously bought pen. This was the very moment when we discovered that both shops were interconnected, however, like in many other places in Portugal, no signs indicated that. Signs and the Iberian peninsula are two things that do not match 😉

After shopping and an initial site seeing we went back to the boat. Dinner was waiting! They served a Portuguese dish similar to a south German stew with boiling meat (German Siedfleisch). However, some additional ingredients were added, like a local pumpkin variant.