Finally, the train arrived at Paris Garde l’Est with 45 minutes delay, which is quite surprising considering the long-planned stops at night. So my spouse arrived first from the Champagne and picked my up. Paris Garde l’Est is in style quite different from old German or British train stations. I cannot point the finger at it, but it looked less dense and more friendly. 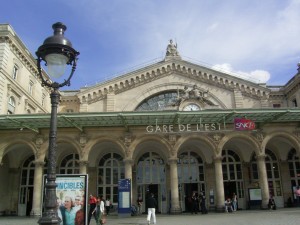 They have a really nice tune before each announcement allowing to concentrate on the announcement before the actual message is communicated. Furthermore, they make their announcement in French, English, and German which would be a great idea for German train stations at least for the big train hubs.

After an extensive greeting procedure we went to a café nearby for coffee, orange juice and a croissant. The café is a really nice place just outside of Garde l’Est at the corner on the right side. 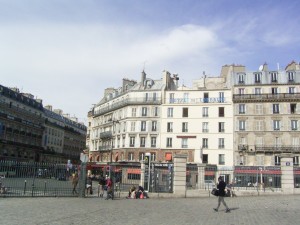 After breakfast, we started our first adventure: Using the Metro. First, we had to discover the right Metro line, in our case 4, and the direction, which was Porte d’Orleans on some maps, but presently it is Mairie de Montrouge. Second, we needed tickets. Different from most German metros, Paris uses access control similar to London. Therefore, you have to buy the ticket and feed it into those access control machines. We found a ticket machine and fiddled around with it, but it seamed impossible to buy two tickets at once. So we had to go through the procedure two times. Third, we had to get through the entrance doors with all our luggage. We found a door with extra space luggage, but first it was impossible to feed the ticket into the machine. So we pressed a help button on a panel which looked quite unrelated to the entrance control. After that the ticket was accepted. To get through you have to pick the ticket up again otherwise the doors stay locked. This is a wise precaution, because without ticket you cannot leave the subway at the other end.

Finally, we got through and after some running up and down, we found the right platform and jumped in a metro. The driving is similar to Kiel or Oldenburg buses. Meaning, you really have to hold on. Otherwise you and your luggage will form some kind of a avalanche roaring back through the train.

Hotel l’Orchidee was our selection of a hotel in Paris Montparnasse. Its web-presence was acceptable for our price range and the service included free wi-fi, which is quite important if you have booked everything online and rely for all kinds of information via the net. Furthermore, it is located close to the train station Paris Montparnasse which is where we will embark on our journey to Lisbon. The choice avoided the necessity to use the Metro or other transportation device to get to the train station.

After check in we dropped of the luggage at the hotel’s luggage drop of booth, as the room was not ready yet and decided to start exploring Paris. I have never been here before and so everything was new to me. Our first trip was to a nearby cemetery where a lot of famous people are buried. For example, Jean-Paul Satré and Simone de Beauvoir, which we found after a while wandering around the cemetery. Compared to German cemeteries, there is not much grass or plants to be found.

The cemetery looked very crowed by all these graves next to each other. The whole thing looked fascinating and we speculated about the origin of the people and families. We found quite a large number of Jewish graves with German sounding names. We guessed they are related to the Nazi actions forcing Jews out of Germany.

After that visit we grew hungry and browsed the nearby area to find a restaurant. Finally, we succeeded! An Italian restaurant was discovered by us where we managed to order spaghetti Frutti Di Mare and penne a Gorgonzola together with wine (of course) and tab water. The ristorante (Swann et Vincent) is a nice place, and it should be recommended as a delicious place.

Well fed, we returned to the hotel to move our luggage to our temporary residence and then we switched back to explorer mode. We intended to visit the Chateau de Luxembourg in a nearby park, but it was too late. The park was going to be closed for the evening. A scheme we found repeatedly for all other parks. I really do not know why. Do they think the parks may be stolen at night or used as cap ground? We do not know, but maybe we find out.

So we had to make other plans and decided to pay the Seine and Notre Dame a visit. If you know normal Notre Dame images from any source, the cathedral looks dark, like many Gothic buildings. Surprisingly they cleaned it quite recently (most likely because of the 850 anniversary of Notre Dame) which makes the whole thing much more friendly. Not like the cathedral in Cologne, which is as black as the soul of their Bishop. 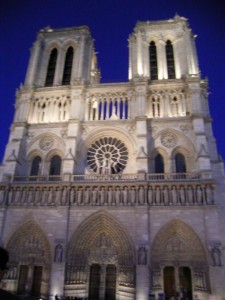 Outside of Notre Dame a lot of tourists were hanging around, but also some artists performing stunts with roller-skates. We became tired and went back to the hotel. On the way we had some crepes and later the most expensive ice cream ever. Seven euro for two scoops of ice cream is quite expensive, but if you consider tourist trap factors, like close to Notre Dame, and labeled as British ice cream, plus the extra charge for Paris, and the extra for being really a good ice cream, then three times the price compared to Kiel’s best ice cream place is quite in order.

I could not get to sleep very well in that German sleeper train, but that was primarily due to my state of excitement (‘going to Paris yeah!’) and in my error regarding open curtains. At home I do not need the curtains to be shut at night to be able to sleep, but in moving houses (alias trains), the changing lights are quite disturbing. In addition the mattress was some plastic something, so it was too warm, but the classical one leg outside the pillow was too cold. And I just realized in the morning that I could have regulated temperature with the temperature regulator above the door. So all in all. The discomfort was primarily my own fault.

In the morning, I got up early. Outside the train, it was raining in strings. I thought by myself, ‘what the heck’. I was just coming from North Germany with sunshine and 25 degrees. And now rain in France. Sigh! So I attended to some morning duties and tried to find my room served breakfast. When I came back, I found another feature in my cabin. A wall socket, where I could recharge my computer.

The room served breakfast comprises of a bread role similar to French bread roles, jam, butter, a poultry spread, orange juice, and of course, coffee. As an (totally unusual) early bird, I also got a small table delivered to my room. Do you get that in business class in an air plane? I guess not.

So now I am sitting on my bed, a lot of French landscape is passing outside the window and while I get better, due to more coffee intake, the weather is clearing up as well. Maybe it had some coffee too. Looks like, it will be a nice day in Paris.

As a typical German, I also have to point out little improvements for the cabin supply of paper. Dear, Deutsche Bahn, thanks for the leaflet to criticize the breakfast service. However, it would have been nice to find a room leaflet. One, stating how the things work in the room and where to find everything. In addition, in former times, there was a cabinet in the cabin I occupied. Nowadays it cannot be opened, because something was build in front of it. This is not really a problem. The real problem is that the door is still labeled with how to open the door. Quite a confusing set of information.