On Monday I went to a barber in the nearby mall. As after my trip to Joburg and the dry air my air needed some maintenance. I was also considering to get the hair shorter (well I was considering this for a long time now). I discussed my plans with the hairdresser and she recommended against it. It wouldn’t do any good and in the end I would look like a baseball. And this would be a bad idea. So I skipped my ided and had a normal haircut.

At 11:00 o’clock Manfred picked me up at the mall and we drove to CSIR (next time I will drive there on my own, however this time Manfred had the car). At CSIR we went to the Maraka  building. Maraka is an CSIR institute.

At the institute I had a talk with Alta van der Merwe (the professor I made the appointment for Monday) and two of her colleagues at the CSIR. We talked about their primary research areas and what type of application they are working on. As all scientists in this world they need funding and therefore they have tow sources of finance. One is medical research and the other is security (funded by the military).

Then I explained what my greater picture is and were I come from scientifically speaking. And that I see here one area of common interest and that is data mining of natural texts for ontologies. After that, we talked about finances and that is possible to get me a job at CSIR as a PhD student with funding which will be approx. 160 K R. this is not much, but it would be enough in South Africa. However, working for a company in South Africa for a while and starting to study then would be a good idea, because that would allow me to get a home and a car and other required things before I start thesis writing.

Another open issue is to transfer my German Diploma into something the South African understand. Therefore I already wrote a letter to Willi (my Prof. in Germany) and to Angela Ring on the subject. I need my Diploma and I need a Diploma Supplement, which states what I have studied, which courses I have taken etc. The thing has to be in English. The first reply, I got was, that a Diploma Supplement is not designated for my Diploma. However, I know that I have the right to get one (one good thing coming out of having studied educational science), but this will obliviously take some time, because they have to write it from scratch.

Also I have to write my ideas down and get them to Alta so she has a chance to see possible intersection with her work. I also have to look what the three are doing at UNISA and CSIR so I can anticipate some possible reactions.

And yes I have to push the folks at Bula a little bit, because they didn’t answer me. Also I have to talk to Fady, because there might be also other possible jobs here. Otherwise I have to coordinate this from Germany, which is possible, but a personal contact is better.

Ah yes one important thing here is, nobody really asked me about my age. Or told me that I am too old for this or that. In this point Germany sucks big time.

On Friday I had an appointment at the university with this software engineering professor and department head. But first we delivered some booklets to different places in Pretoria. And I took the liberty to make some photographs from the surrounding. 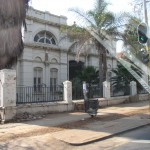 A building of the Pretoria Zoo 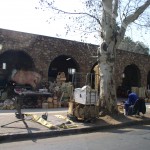 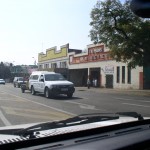 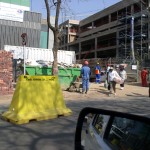 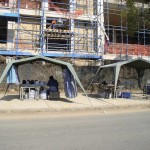 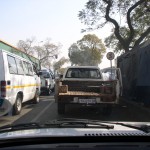 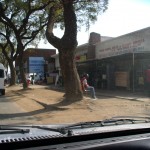 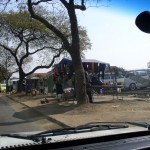 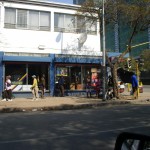 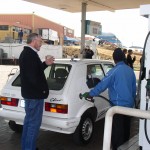 The first picture show Manfred chatting with, so to speak, the filling station attendant. As you can see, you have not to do the filling yourself. To be more precise doing it yourself would be rude. After this stop we went to Pretoria. The pictures in the gallery show the streets in Pretoria and one of the buildings of the Pretoria Zoo.

At 10:45 we reached UNISA. We almost managed it to the right office without asking anyone :-). However the building is big and for the last meters we had to ask again. Nevertheless we arrived at the right place.

Intentionally I brought my paper, which I had submitted to SWESE’08 to this meeting. After the initial greeting period I explained my intentions and my idea a little bit and handed over the paper. The professor had a short look at it and then asked a colleague to examine my writing. As the paper was not on one of his topics.

So we waited for his colleague to arrive. She had a short look at it, and read some parts of it and was quite excited. So this was also a test for me to see if the paper is worth anything. So I talked a little bit more and went to her office. Fortunately I had my thesis with me (on my usbstick) so she got a copy of it. And I promised to send her my paper as PDF as well. Furthermore we arranged an appointment on Monday at the CSIR.

After this meeting I was excited, because this looked like a possible opportunity for my PhD work. And I could be in South Africa instead of another first world country like rainy Ireland, or sunburn Australia.