The Bible Institute at Kalk Bay

At seven o’clock the mobile woke me up. Manfred went to the bathroom first so I could stay in bed for a while. 😉

When he came back he informed me that the bath lacks warm water and that there is no shower head and no plug for the bath tub. “Well, who needs a bath tub for showering?” I thought and went to the bath knowing it will be a could experience. But there was no way around it. After 14 hours driving my hear needed a wash.

When I entered the bathroom I saw that my brother had underestimated the situation. There was no shower head, there was also no hose or anything which would normally be part of a shower. Consequently there was no curtain as well.

The only thing in this room was the bathtub and two faucets for hot and cold water, which allowed me actually to choose between cold and cold water. With cold I mean COLD like in Siberia. So this became a very cold and very difficult washing experience. Try to wash your hair with ice water while you have to put you head under the faucet and do not fall over. Especially without a coffee in advance. 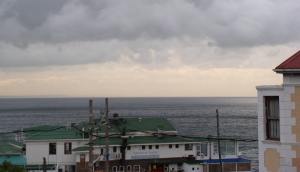 After I had frozen the dirt of me, I went out for a walk.  We were in Kalk Bay where you can actually walk outside without being mugged. So I walked down the road and discovered my first pedestrian robot in South Africa. I found a small bakery, a supermarket, and a couple of nice cafes. In one alley a monkey sat on a trashcan dismantling several bags and throwing liter around him. He was definitely searching for some breakfast.

This reminded me that I hadn’t had breakfast as well. So I turned to find myself some breakfast. The little bakery I discovered earlier seemed to be the right place to look for something to eat. So I went there and acquired a coffee and a croissant.

Afterwards I went back to the institute. There I started writing the entry for today. After tee break at 10:30 I attended one of my brothers lessons on the Islamic believe, fundamentalism and peace. So I know now anything about these terms from a Christian perspective and also that these terms are confused today, because lots of people think fundamentalism equals terrorism, but actually that is not the meaning of fundamentalism. For example if you think human rights are the basis for all of us, then you are a human rights fundamentalist. 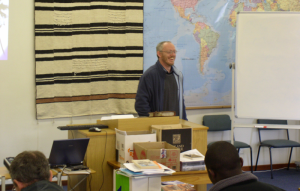 As an afternoon exercise, he send the students out to talk to real Muslims (so they hopefully get a realistic perspective on the subject) and ask them about the five Pillars of Islam. The intend of this exercise was to give them the chance to interact with real people and not bruting about imaginary Muslims which do only exist in their minds (constructed out of CNN and 1001 night stories).

Manfred and I went out also for some talk with Muslims. In the second house we visited we found an old fisherman, who was willing to talk with us. And so we talked about believes. Very interesting, at least for me. The fisherman told us also were we can get good snook, which is quite a lekker fish (as they say here). And indeed prepared properly it is quite delicious.

Then we went to SIM and did some shopping and delivering. Before that, we wanted to check our mail. However the Internet connection was broken and so I had to fix it first (it is always clever to have a geek with you, you never know when you need one).  The IT at the institute was (no is) a total mess. I tried to fix it, but while sitting there and checking things, five people tried to plug in things and reconfigured the network, so nothing could be done properly and ended up in total chaos. In the end we managed to get them away, and so I reconfigured the system in a way which allowed surfing from some systems as a temporary solution. 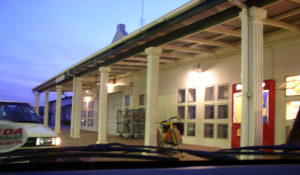 Then we drove to SIM for a short talk and jumped into the evening traffic on our way to the wine and distillery region close to Cape Town. We stopped at a filling station and I made a picture of it because it had such an interesting architecture.

Then we went on to deliver a video tape to a friend of Manfred and were invited for supper. Because they had already eaten, we got the opportunity to prepare and eat some snook ourselves. Manfred as a chef did a marvelous job (It is always a good idea to have a cook around).

Afterwards we talked with some guests from Germany at that place. They were really German, like in huh in South Africa there is so much chaos. These folks were also going to visit us in Joburg.

Then we went back to the institute. At the way back we passed Khayelitsha, one of the larger townships. Over 900000 people live there in small boxes made out of junk. We had a development of these townships and after half an hour of discussion, I could still see the township going on and on along the N2. Remember the township has as many inhabitants as cologne. And all these people have no own toilet and water supply in their home. Well right now they have something like a high-tech chamber pot which is pickup every day (if I remember that correctly). The light for the township comes from huge floodlights turning the area in a yellowish light. This is so to reduce the crime rate in the townships.

In past times they even didn’t had community water supply, but as a development act the government installed community fountains throughout the township and electricity for the huts. The government also tried to build these people real houses, but that didn’t work out, because the people reused doors as firewood.

The development of these township face two major problems. First, people are so poor, they do not have the necessary requirements for life, which is one source of violence, health and other problems. And second, they have cultural induced problems.

For example: When a teacher asks a person to read a passage of text in class. This person will most likely have two thoughts in her mind. First, she thinks if I read this and I read it well, then all will think I want to show off. This is embarrassing, so I can’t read. And second, if I make a mistake they will laugh at me, this is embarrassing too. The result is, that this person will refuse to read.

A way around this dilemma is to ask the class to read the text together. So there are solution to some part of the problem. However, the running away and hide tactic when you are ashamed is problematic in a modern business relationship, because running away will most likely not fix the problem which arose and which embarrassed you in the first place. Therefore solutions have to be found to either trigger a cultural development to a more guilt based culture or find a way to manage with this cultural concept.