We visited everyday some friends or associates of Manfred in Cape Town. However, Manfred showed me the Waterfront, which are the old harbor warehouses. Now they are a mall. The outside looks quite nice, but it was raining so much, that I didn’t took any pictures which were usable. The inside looks like any mall despite a small crafts area. Unfortunately it is not allowed to make any pictures in that area.

In this crafts area, I tried to find some gifts, however the place is a tourist trap so the prices are comparable to Hamburgs inner city prices. For example flowers for R 200 where you normally pay R 20. And even in Germany it wouldn’t be that expensive. Afterwards we drove to the nightly Cape Town and had supper.

Actually we had supper every evening in a different place, visiting different people. At Wednesday we visited an old married couple. He had founded a company to increase life quality and security in one of the so called “kill me quick” areas of Cape Town. The result was that now the area is much cleaner and safer than before, and also economic growth. However, this also resulted in pushing certain people out of the district into the neighbor districts. However, the approach was not some foolish city marketing approach (like Manchester, hi Thorsten).

On Thursday we met another older Afrikaans couple. They gave us a warm welcome. After supper, we had tea and after a while Manfred and the host went of to look up some information. So his wife and I had a talk about almost every topic. Starting with tea, economy, politics, schools, coffee, and ending with South Africa. 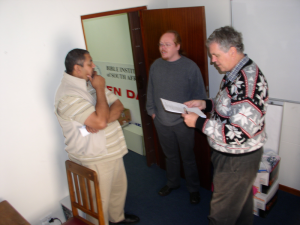 Talking to the principal (r) and the head of IT (l).

As I already told, the IT at the bible institute is in bad shape. Therefore I wrote the a small assessment and proposal (in exchange for food and accommodation). First, I insisted on using WPA to encrypt their WLAN. Second, I explained how the infrastructure is implemented right now and what they should change to get a usable system without much investment.

They were quite thankful for the input, however it has to be seen if they implement anything of my suggestions.

We encouraged them not to switch to Windows on their server, because this would render their X11-terminals useless. And then there would be no working student computer on the campus. The strange thing, they didn’t know this. And they blocked USB-sticks on the X11-terminals to prevent virus distribution. However, windows viruses won’t run on these machines. After the meeting we left for George and Joburg, but that I describe in another entry.