Yesterday we were driving from Jo-burg to Capetown. We, this is my brother Manfred and I. We started at 6:30, in the middle of the night. packed with some food, warm clothes, and my brothers half office. And actually I didn’t forget the camera. 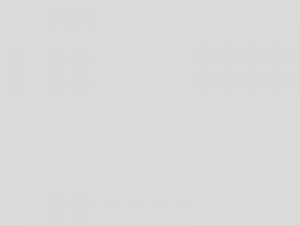 From Jo-burg to Kimberly Part I

This Sunday was a foggy one. So in the beginning I couldn’t take pictures. Actually could, but the would have look like this (see picture 1).

At 9 o’clock the fog started to disappear, but that was the time I started driving. Yes indeed I took the liberty to manoeuvre the vehicle on almost empty roads fro 2 and a half hour. To improve my training experience, the south African government implemented a training course for me with randomly placed speed limits, faked and real road maintenance obstacles.

To be honest, they are improving the road for 2010 (World Soccer Championship in ZA). So some sections of the N12 are under construction and only one lane is available for both directions. In such circumstances Germans would place a traffic light at each end of the construction zone to implement mutual exclusion for the single lane road. However, in ZA things are different. First, they are nicer to you and give you and estimate how long you probably have to wait. This information is posted on a big sign at the waiting point. Second, the traffic light (in ZA called robot) is represented by a stop and go sign and sometimes additionally with two of these cone shaped things I even do not know the German term for it.

At the end of the waiting period a construction worked turns the stop sign. Now it is a go-sign and you can drive on.

The speed limit in construction zones is 60 km/h, but nobody seems to honour the information as a definite limit (just like in Germany). The meaning is, if there are people around you better drive slowly otherwise don’t bother.

As there is a saying: When in Rome, do like the Romans do. I did like the ZAs did.

Ah yes, and there is something interesting for people lived in Germany all there life. When you are driving on a road and have oncoming traffic and poeple behind you want to overtake you, you move your car to the left (in Germany this would mean to the right) on the emergency lane, to use it as a temporary lane, which allows the car behind you to go on. I’ve obsevered the same behaviour in Canada several years ago. And it is considered a friendly gesture. In Germany this would be offensive. Of course it is illegal in ZA to do so, but it is custom.

It is also custom to switch on the indicators (like for an emergency) for a short time, when you pass someone who made place for you. This is a way to say thank you. At the past as you can even reply to it by a short tip on the headlamp flasher.

Well, while driving I didn’t take pictures, but afterwards I tried to document every thing. So I mode 150 photos of trees, roads, houses, cactuses, bushes, sheeps, mountains, some more bushes, …

On our way from Jo-burg to Capetown, we had to cross the Karoo. The Karoo is a steppe. One famous animal of the Karoo is the Karoo-sheep, which is some sort of Heidschnucke because normal sheep won’t make it. Unfortunately the images of the Karoo-ship are unusable. To secure the sheeps, the farmers place ostriches by the sheeps. They act as scarecrow, but the other way round. So they are there to keep sheep thiefs away. For one, these ostriches can really hurt people and the ostriches are also feared by the black people, who would be otherwise interested in a sheep for free. This is quite understandable if you see how poor they are. With poor I mean not poor like any of those people living in social housing in Germany. I mean people living in huts made out of corrugated metal (see picture 2).

These huts are actually the better buildings they are living in. So I really can understand their interest in a sheep once and a while.

The next view images show the change of the plant life. In the beginning there is still grass. As you can see the grass is replaced by small bushes and cactuses start to appear. Also the bushes get smaller and the trees vanish.

The Karoo, the grass is still high 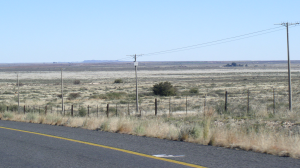 The grass is mostly gone, no trees, and small bushes

The mountains are table-mountains, and as you can see in picture 3. The table level indicate the hight of the area several million years ago. Beside that, it is a great view. Actually the Karoo is filled with great views. So after 10 hours of great views, I had enough of all these perfect calendar pictures. But I know when I look back on this trip I always will remember these interesting views.

The grass is mostly gone, no trees, and small bushes

Table Mountains in the Karoo

As I know from personal experience, most European, who have never seen such views, underestimate the distances. So I give you some pointers. In picture 4 you see the highway going on to the horizon. The last point of the road you can see is about 5-8 km away (depends how good you can see).

The N12 in the Karoo

The mountains behind are actually half an hour driving away. On 120 km/h this makes them 60 km away. This means grass and bushes from Oldenburg to Bremen and one interstate highway and no houses. (I will add more photos later)

After driving through the Karoo for 10 hours, we arrived in Capetown at night. Picture 5 shows a part of the city at night.

In Capetown we went to the Bible Institute were tow nice young persons let us in and showed us our room. The room had two beds, and the room was humid and muggy, but after 14 hours driving, we were dead tired and so we literally hit the sack.